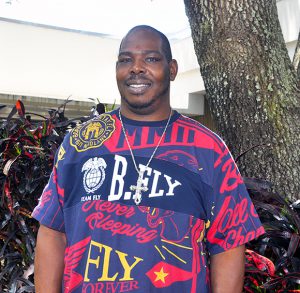 AVON PARK, Fla. – April 30, 2019 – Jocquas Walker suffered a stroke at age 32. Through self-determination and a deep faith in God, he prevailed over several obstacles. Walker graduates with his Associate in Arts degree and serves as student speaker on Tuesday, May 7, 7:45 p.m., during the South Florida State College (SFSC) Commencement ceremony on the Highlands Campus in Avon Park.

Walker graduated from Avon Park High School in 2001 and, shortly after, went out into the work world. “In my family, there was an emphasis on getting a high school diploma,” Walker said. “Then, we were to decide to go to college or get a job.”

Walker started working as a youth care worker at the Avon Park Youth Academy, which is now the Highlands Youth Academy. The Academy is a residential facility for youth, ages 15-19, who are required by a judge to stay in the care of the Department of Juvenile Justice for an extended time.

Eventually, Walker headed into middle management and became the supervisor of other direct care staff. “The kids were juvenile offenders from other parts of Florida, so the direct care staff ensured that the kids learned to respect each other’s space, learn a trade, do everyday things like laundry, and adhere to educational requirements.”

Walker said, “We were role models for them, and we were their last chance before going to prison. We would provide coaching, counseling, and mentoring. Although they each had a case manager, a lot of kids came to us about typical teenage issues. We provided them with the support, guidance, and tools to redirect their way of life. Many of them came from troubled homes and troubled neighborhoods.”

Walker explained that because he came from a two-parent home that was well structured and included discipline, the home and life experiences of the teenagers was a shock to him. “Through the experience at the Academy, I learned that not everybody has the opportunities that others do,” he said. “You can’t assume that everyone is at the same level with daily issues. It gave me an understanding of where someone else is coming from. I wanted to make an impact on someone else’s life, and I’m still passionate about it.”

When Walker’s church opened a daycare center, he took a second job as a cook. In the process, he truly learned where his passions lay. “I found more peace working with the teenagers than with the 2- and 3-year-olds. Those little ones were determined to challenge me.”

But Walker’s work life, eventually, came to a screeching halt. He had suffered from hypertension and diabetes since he was in high school and lost his kidneys in 2011.

“I put my job and the needs of the teenagers way above my own,” he said. “I got so caught up in the job that I didn’t pay attention to myself. You need to take care of yourself; otherwise, you can’t take care of someone else.”

Walker said that one morning, he had an unusual headache, took an aspirin and laid down for an hour. Because he had been on dialysis for three years, one of the staff at the Academy would call him each day to make sure he was OK. At 2 a.m., he woke up and then passed out on the floor. He laid there for 10 hours. On that particular day, his co-worker hadn’t called; however, later in the day, they came by Walker’s house to see where he was.

“I was told that due to the length of time that I was down, I could have had more physical and cognitive damage,” he said. “In the midst of the impossible, God was with me the whole time. I saw the stroke as a wakeup call. God raised me up—I started eating better and taking care of myself. I was determined not to take this as a defeat. I was determined to walk again and feed myself.”

After the stroke, Walker relied on a wheelchair, unable to walk. “I had a lot of muscle atrophy. To this day, I can see that the left leg is there, but I can’t feel it. I couldn’t walk, I couldn’t dress myself. I needed assistance getting out of the bed and grooming myself. Although I’m not physically as I was, I can talk. It damaged my mobility—I can’t stand for a long time and my gait is off. Walking is a struggle because I also have congestive heart failure. It’s like dragging another person along.”

Walker found his way to SFSC because he had always wanted to be a college student. “I got caught up in working, and I didn’t think I was a particularly smart kid,” he said. “At home, it was mandatory that you went to school and did your homework. But when I was 18 years old, I had no alternative but to get a job. But the stroke left me with ‘What’s next?’ I no longer had my job and my independence was gone. So, I knew I had to do something.”

One day, Walker was having a conversation with his former fifth grade teacher from Park Elementary School, Carolyn Gilliam. She encouraged him to take classes at SFSC. But he told her that he didn’t think he was ready or smart enough to go to college. Gilliam turned to him and said, “Yes you are.”

Walker visited the SFSC Advising and Counseling Center and the Career Development Center, applied to the College and registered for classes. “I studied hard,” he said. “I had no problem going to the professors to ask questions. They were patient and understanding. Those responses made me comfortable to strive every single day. The professors pushed me and gave me a nudge that said, ‘You can do this.’ It was almost like a divine appointment.”

Because of his success at SFSC, Walker is now a member of Phi Theta Kappa (PTK). This prestigious, international honor society recognizes the academic achievements of community and state college students. “I was walking to math class one day and saw a poster about PTK. At that moment, I decided I wanted to become a member. In fact, I was invited to become a member and, last April, I was inducted into SFSC’s Tau Epsilon chapter of PTK.”

Walker plans to continue his education and pursue a bachelor’s degree in criminal justice and a master’s degree in counseling. “God is teaching me not to settle for comfort all the time,” he said. “Next fall, I’ll be pursuing another degree at a university.”

One of Walker’s favorite Bible verses is from Jeremiah 29:11 and serves as a basis for his advice to others who face life’s challenges: “For I know the plans I have for you, plans to prosper you and not to harm you, plans to give you hope and a future.”

“I remember that God has a plan for me,” Walker said. “I would tell others to never take no for an answer. Keep striving, and if you put God in the equation, there’s nothing off limits to you.”