Student Finds His Calling as a Corrections Officer 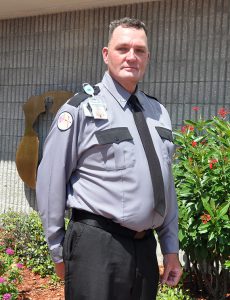 AVON PARK, Fla. – June 23, 2021 – At age 51, Roger Engle II knows who he is and has lived a life devoted to God. But he recently decided to make a change in life. He graduated with the South Florida State College (SFSC) Basic Corrections Class 21-104 on Thursday, May 27 at the Highlands Campus in Avon Park. In fact, he was recognized for having Top Academics in his class and served as class executive officer.

Engle had previously served as a missionary in Honduras for 25 years. For him, service to God was a calling.

“When I was 14 years old, my family and I lived in North Carolina,” he said. “We attended a Southern Baptist church. One Sunday, the pastor talked about when he received the calling of the Lord into his life. While he was talking about it, the same sensations that he described were happening to me while I listened to him. After school one day, I asked him what I needed to do. He said, ‘You’ve got to go to seminary, son.’ But I didn’t think I would be able to even go to college, financially or grade wise. I was smart, but I was more interested in girls and having fun than I was in getting good grades. I was in ninth grade at the time, but I already knew that I wasn’t cut out for sitting in classrooms. I’m better at studying now as an adult, because I have a few years under my belt and I realize that a lot more in your life hinges on it, and it gives you a sense of priority.”

At that time, Engle got angry because he didn’t want to go to college. “I didn’t think that college was for me,” he said. “So, how could I go to seminary, if I’m not going to college? I decided that I was going to show God that He didn’t want me and did everything I could to prove to God that I was not someone He wanted serving Him.”

Years later, Engle needed a place to sleep and had come upon a street mission in Sebring, Fla. It was the early 1990s. The mission had been given tickets to a performance of a Christian comedian at SFSC’s theater and Engle was offered one of those tickets. In the middle of his performance, the comedian picked up a Bible and quoted from Deuteronomy 28.

“Basically, it says, ‘Look, I’m giving you the way to go.’” Engle said. “It says, ‘Just listen to my voice and do what I’m saying. I’ll guide you out of the trouble. But if you don’t want to listen to me, there’s trouble out there and it’s going to catch up with you.’” The comedian stressed that the passage is a directive to “take action.”

“The comedian said that somewhere in your past, God told you to do something and you didn’t do it,” Engle said. “He said to examine what it was God told you to do and make up your mind that you’re going to do it. So, I did. I knew God wanted me to minister the gospel.”

The street mission, eventually, took Engle on as a volunteer. “But I had a problem with rebellion,” he said. “I was a rebellious young man. Afterall, I had practiced it for the last seven years of my life.”

The pastor at the street mission sponsored Engle for a year in a discipleship program called Teen Challenge that was located in the middle of an orange grove in Winter Haven. “At Teen Challenge, you intensively study the Bible all day, every day, or work with the sweat of your brow, digging holes, cutting underbrush, or washing cars. But you’re always working and studying the Bible.”

While at Teen Challenge, Engle met his future wife, Katrina. She had graduated from Teen Challenge and had returned one day to visit her former counselor. “She said that she could tell from the get go that I had designs on her,” Engle said. But the two didn’t meet again until later.

When Engle returned to the street mission in Sebring as a paid employee, they were informed that their missionary had been in a plane crash in Honduras. That missionary was Katrina. She was in the hospital for six weeks, then returned to Florida. “She was still in a body cast and needed someone to push her wheelchair around places like the grocery store,” Engle said. “And that was me. During that time, we got to know each other.” They, eventually, married.

Engle volunteered to go to Honduras as a missionary and discovered that his purpose was different from what he expected. “When I first went, I thought I was God’s gift to the Hondurans and He’s going to send me there to save all His people,” Engle said. “But we’re not as important to God’s work as God’s work is to us. In sending us to do something for Him, His main concern is how it’s going to mold and shape us. His entire use of us in any work of His is for our sake, not for His sake. No matter how things may seem, no matter how impossible it may seem that you get the items you need, He always comes through.”

After 20 years doing mission work together in Honduras, Katrina was diagnosed with cancer. So, the Engles returned to the United States. In spite of receiving the best medical treatment, Katrina passed away.

Over time, Engle took a job with a local auto dealership. The pandemic has affected millions of people across the country, and Engle was no different. He was interested in having good benefits going forward. One day, a customer at the car dealership told Engle that her daughter had just graduated from a Corrections program. She also mentioned that she had retired from working for the state and said the state has great retirement benefits. Further, the customer’s daughter was a few years older than Engle, so he thought that if she could do it, so could he.

Engle currently works for the Florida Department of Corrections at the prison in Avon Park. After his recent graduation from SFSC’s Criminal Justice Academy Corrections program, he feels that he has a lot to bring to his job.

“I’m 51 years old,” he said. “I’m not one of these young guys who doesn’t know who I am yet. I spent 25 years in the mission field in Honduras. Between coming to Sebring initially and later returning, I was married, raised four of my own kids, and about 60 or 70 children in Honduras who called me Dad.” In fact, he proudly mentioned that his daughter is an SFSC graduate and currently attends the United States Military Academy at West Point.

In the town where he lived in Honduras, Engle would visit the prison at least three times a week and minister to the inmates there. “A corrections officer should have a compassionate heart and be willing to care for the inmates,” he said. “Those are the three main concerns of our job—the care, custody, and control of inmates. Most correctional officers will have no problem with the custody and control, but there has to be a balance. You can’t let the amount of care for them cause you to overlook the fact that they are in your custody and you need to keep them under control. But, if you can balance out the custody and control with a measured amount of care, their lives will be enhanced. And, possibly and potentially, when they get out of prison, they’ll actually have a desire to contribute to society. Some of them were, actually, contributing citizens before they went in. I feel that with positive guidance, they’re more likely to land on their feet and keep going from there.”

For Engle, his graduation from the Corrections program is a benchmark. “I didn’t know that I was going to be able to accomplish this,” he said. “I’m 51 years old. Physically, I wasn’t as fit as some of the other students. It’s been 30 years since I studied except for studying the Bible. But while I was in the program, I developed good study habits. I was fastidious. This is the first time I ever graduated from any kind of vocational certificate course.”

Engle attributes some of his success in the program to Mike Austin, Criminal Justice Programs coordinator. “I look up to Mike Austin,” he said. “He’s one of the best instructors that I’ve ever had. He’s very professional and knows how to separate his personal feelings and not let them be known and do what it takes to mold and shape his students. The whole time, I was thinking, ‘He must hate me.’ Because he was so hard on me. I realize what it was. I was the executive officer of the class. He knew how hard it is for someone with a compassionate heart like mine to keep emotions out of it. He was just trying to make sure that I could handle it. He said a couple of times, ‘You got a little emotional there, Engle, but the next day you were right back on top of it. I’m really proud of you for that.’ I said, ‘You pissed me off there a couple times, Mike.’ And he just laughed, ‘It’s my job.’ Mike Austin’s a good guy.”