Students Give Rodger Smith High Marks for Love of Learning 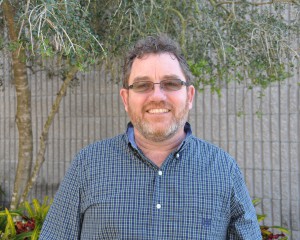 He also loves his job.

“I am now in my third year teaching full-time at South Florida State College,” said Smith. “I have to say I really, really love this work.”

At a time when record a number of Americans report dissatisfaction with their work, Smith’s love for his job stands out. He teaches introductory psychology courses at SFSC.

Job satisfaction among Americans topped 60 percent in the late 1980s, according to the Conference Board, a nonprofit business research firm that publishes an annual survey of U.S. workers’ level of contentment with their jobs.

Last year, only 48.3 percent of Americans said they were satisfied with their jobs. A majority of Americans hasn’t been satisfied at work since 2005.

Smith places himself squarely in the camp of those who hold a genuine affection for their jobs. He found himself at SFSC after he landed a part-time teaching position on the Highlands Campus in Avon Park in 2007, a position he did not seek out.

“I was busy with my own consulting business at the time and got a call from a friend to fill in for an SFSC instructor who had to take leave,” said Smith, who agreed to step in teaching for a few weeks. “Next, the dean asked me if I might be interested in developing an online psychology course and I said, ‘Sure, I can do that.’ ”

Smith had completed his doctoral degree in adolescent psychology two years earlier, after working for 14 years with teens and adults recovering from substance abuse.

“I had learned that my calling was working with kids, especially those who had drug abuse problems” Smith said, from his office in the SFSC University Center. “That’s how I got started in psychology and also working with adults,” he said.

Like his chancing upon SFSC, Smith didn’t set out on a career in addictions treatment—he sort of stumbled into it.

“I am from God’s country, South Jersey, a place called Haddon Heights,” Smith said. “I moved to Fort Lauderdale in 1992 to spend some time with my brother and took a job a drug treatment program for adolescents simply because I needed money.”

It was at Outreach Broward, a residential center for children 8 to 18, that Smith found his calling. At age 25, still single and without a college degree, Smith said he started to learn about mental health and addictions treatment. Even though his choice was made without any forethought, Smith said he took to working with teens in trouble.

He decided to complete his bachelor’s degree. He also decided to start a family, marrying his wife Dawn on New Year’s Eve in 1996. “When people get to know my wife, they forget my name,” Smith said with a laugh. “She’s not my better half, she’s more like my better three-quarters.”

Soon came their first child, a son Aslan, named after the great lion who figures throughout “The Chronicles of Narnia” by C.S. Lewis. “They were my favorite books growing up, and not just me, but my wife too,” Smith said.

With a family, a college degree, and several years of addictions treatment experience under his belt, Smith set about finding a town better suited to raising children. “No, I didn’t just get on U.S. Highway 27 heading north to first town that looked OK,” Smith said. “I knew someone here, and my wife and I thought this would be a better environment for our kids than Broward County.”

As it was by happenstance that Smith came to teach at SFSC, so it was that he found clinical work in Highlands County. “When I got here without a job, I looked for work in adolescent mental health,” said Smith. “But, if you look around, you’ll notice there isn’t any.”

Driving down West College Drive, Smith noticed the Florida Additions Treatment Center. He inquired about employment, and though his background was in adolescent programs, he got hired on as an addictions counselor.

“My expertise was with kids, but I discovered I enjoyed working with adults too.”

Soon came two more children, two girls, Rilian and Corin, like their older brother taking their names from characters in Lewis’s novels. Smith left full-time counseling to devote time to graduate school. He attained state certification as an addictions counselor and mental health professional, and earned his doctorate degree from Capella University in 2006.

Rather than return to counseling, Smith opted for a stint as consultant to owners of small to medium-sized businesses. “I had always had an interest in administration, which is something I did while at the addictions treatment center in Avon Park,” Smith said. “Here, as well, I found work that really appealed to me.”

Then came the call in 2007 asking if Smith would substitute for the SFSC instructor, bringing him to the attention of college officials. After taking up the dean’s challenge to launch the online psychology course, Smith also started teaching classroom-based psychology courses.

“I enjoyed both angles of the work,” Smith said. “Teaching psychology to students online and in the classroom.” With the departure of a longtime professor, SFSC offered Smith a full-time teaching position.

Smith said his part-time stint at SFSC brought out a love for teaching he had not known he had. “I came to realize that I wanted to do this for the rest of my career,” Smith said. “I knew I wanted to put deep roots down here.”

“Professor Smith brings a wealth of clinical and academic experience to the classroom,” said Kimberly Batty-Herbert, SFSC’s dean for arts and science. “His background in addictions treatment and his experience with adults and children, gives him a perspective on psychology that shows in his classroom instruction and the students’ satisfaction.”

Batty-Herbert said her favorite comment from one of Smith’s students was, “I liked that the instructor made us think!”

Smith’s contentment at SFSC extends to his feelings for Highland County. “Our family is involved in our church and with Highlands Little Theatre,” he said. Smith volunteers as a lighting director and has had parts in several plays. Dawn is a worship leader at First Baptist Church of Lake Placid, and the three children have all acted in productions at the Sebring-based theater company.

When hearing that his students give him high marks for his classroom instructional methods and love of learning, Smith flashes an “aw shucks” smile.

“I like them and they like me,” Smith said with a grin. “I guess it’s a good match.”

“I have loved all my jobs,” Smith said. “I’ve been blessed with interesting jobs and interesting coworkers.”

Even though Smith carries a full teaching load, he still finds time to lead occasional group therapy sessions at the addiction treatment center down the road from the college. He said he had not lost his passion for “all things addictions treatment-related.”

“A lot of people work at jobs they don’t like and don’t want to do,” Smith said. “Not me.”