Students Go on Quest to Learn Science at SFSC

AVON PARK, Fla.–June 8, 2016–Robert Worthington, a prominent and wealthy resident of the community, was murdered in his kitchen while cutting red cabbage. Police find a knife with a strange green stain on the handle had been thrust in his chest.

When detectives arrive, they encounter a slew of suspects. Was it Worthington’s cook, who was preparing a vinegar salad; his maid, who used ammonia to clean the tiles; or his nephew, who had just returned from swimming in the salt water of the ocean? 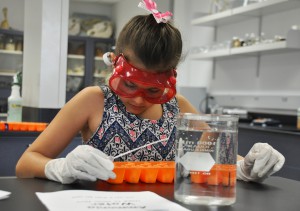 A student tests ammonia against red cabbage juice in an attempt to solve a murder during SFSC’s STEMQuest classes.

The detectives turn to chemists to help sort out a telling clue: the green stain on the knife’s handle.

Those chemists were fourth and fifth graders from schools in South Florida State College’s three-county service area. They were huddled in a laboratory on SFSC’s Highlands Campus running a gamut of tests to determine which suspect left the mysterious green stain.

Worthington is a fictional character, but the scenario and tests were real. The students were participating in SFSC’s summer STEMQuest classes.

SFSC’s STEMQuest program is a series of half- and full-day classes to introduce schoolchildren to science, technology, engineering, and mathematics, popularly known as STEM. SFSC faculty fashion the classes to handle the subjects in a fun and engaging manner.

“Watching the students delve into the experiments and lab work demonstrates that kids love science and technology,” said Dr. Kimberly Batty-Herbert, SFSC’s dean of arts and sciences. Dr. Batty-Herbert oversees the program that runs several times throughout the year.

Leslie Comeaux, a STEM coach at Sun ‘n Lake Elementary School, led the students through a series of chemical tests to determine which suspect caused the green stain to appear on the knife.

Dipping pipettes into several different acid solutions, the students sought to identify what type of chemical might have turned the cabbage juice on the knife green and, in doing so, discover who murdered Worthington.

“Wow, that ammonia really smells awful,” one of the goggle-clad students said, as she tested red cabbage juice against the chemical the maid was using to clean the tiles.

Comeaux gave each student instruction on how to run the tests and ensure personal safety. All the time, she kept reminding them, “If you find out who killed Worthington, keep it to yourself. Don’t blurt out the answer to the murder.”

Across the hall, seventh, eighth, and ninth graders were learning about experimental design. Cedric Bullard, a chemistry teacher at Avon Park High School, walked students through a sample experiment: How many drops of water can a penny hold?

Students bent over their work stations with droppers of various sizes. Each gingerly placing drops of water on pennies. Then the counting started, with the students coming up with wildly varying totals. 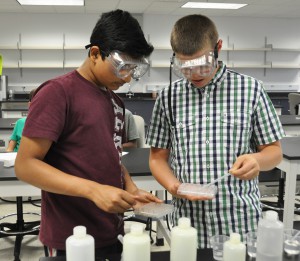 Students collect acid solutions during one of SFSC’s STEMQuest classes.

“You see, it’s important to design an experiment in a scientific manner to come up with valid results,” Bullard told the students. “The size of the dropper, which side of the penny you use, and how far away you hold the dropper will affect the outcome of the experiment.”

Next, the students moved on to real chemistry. Bullard designed an experiment involving acids and bases intended to teach the students how to differentiate between the two chemicals while learning more about the importance of experimental design.

While no murder was involved, Bullard’s students took up the challenge, teaming up in threes to replicate his instructions and produce valid results.

The students ran tests using a conductivity meter to see which bases and acids best served as a conductor of electricity. The students learned about ions and how their presence in the solutions affect the strength with which electricity is conducted.

Back across the hall, at least one student’s test solved Worthington’s murder. “Quiet, now,” Comeaux told the student. “We don’t want anyone but the detectives to know.”

Hearing that command, the other students scurried about from lab station to lab station trying to catch up and solve the murder as well.

“Offering the STEMQuest classes is not only rewarding for the students,” said Dr. Batty-Herbert. “It gives us at SFSC a sense of satisfaction that we are opening up young minds to the wonders of science.”

For more information on SFSC’s STEMQuest programs, contact the SFSC Arts and Sciences office at 863-784-7329.