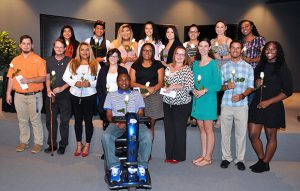 With families and fellow students looking on, the students recited an oath of membership, joining the honor society that recognizes distinguished academic achievement by students enrolled in two-year academic programs.

Michelle Macbeth, SFSC instructor, Foreign Languages and co-advisor for the PTK chapter, served as guest speaker. Macbeth offered the students words of advice, citing a list of five things she wished she had known during her own academic career.

“You shouldn’t feel stuck with any academic decision,” Macbeth said. “You can always change your major or track.”

She went on to explain that education is a tool. “You may love creative writing but that may not be a practical degree for you,” she said. “You need to ask yourself what you’re going to use your degree for.”

“What you think you’re going to do with your life, may change,” Macbeth said. “I loved music, but didn’t love studying music as much as I thought I would, so I changed my major.” She explained that at one point in her career, she was put in front of a class to teach and was dreading the experience. However, she enjoyed it and discovered that teaching was meant to be her life’s work.

Macbeth encouraged the students to make wise decisions. She cautioned that students don’t necessarily have to “do all these crazy ‘college experience’ things.” Speaking in the extreme, she said that incurring a felony would haunt a student for the rest of his or her life. “Be wise in your decisions.”

Finally, Macbeth encouraged students, “Don’t let fear keep you from doing things that will be rewarding in the long run.”

As the ceremony drew to a close, the inductees each signed the honor society’s membership book, recording their status as scholars of distinction at SFSC. When the auditorium lights dimmed, each scholar lit a candle signifying their fellowship in the society.