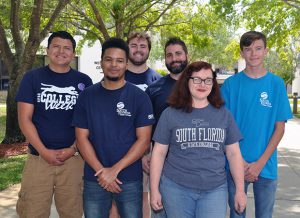 The six SFSC students will be recognized, formally, at an awards ceremony on Friday, April 6 in Tampa. The SFSC students earning the recognition are Austin Beck, Anthony Burnett, Zachary Geitner, Danny Sustaita, Erika Weaver-Coleman, and Kevin Webb. They join 135 of their peers from the 28-member Florida College System in being named to the academic team.

“We are so pleased with the academic accomplishments of these six scholars from the Tau Epsilon Chapter of Phi Theta Kappa at South Florida State College,” said Dr. Sonji Nicholas, PTK advisor and professor of sociology. “Each scholar gives credence to the idea that diligence in academic endeavors has many rewards. Being named as All-Florida Academic Team member is both an honor and a wonderful way to recognize and celebrate the dedication to academic excellence that each awardee has demonstrated while studying at SFSC. We are so proud of them!”

Students named to the All-Florida Academic Team were drawn from SFSC’s Honors Program and the college’s Tau Epsilon chapter of Phi Theta Kappa (PTK), an international academic honor society. In nominating students for the All-Florida Academic Team, colleges consider participation in academic honors programs, membership in and awards from collegiate societies, and academic enrichment gained from internships and special projects.

Weaver-Coleman has also been named a 2018 Coca-Cola Academic Team Bronze Scholar and will receive a $1,000 scholarship. Phi Theta Kappa student members are nominated for the academic team by their college administrators. Selection is based on academic achievement, leadership, and engagement in college and community service.

The Coca-Cola Academic Team Scholars will be recognized at the Phi Theta Kappa Annual Convention, April 19-21, in Kansas City, Mo.

Phi Theta Kappa is an honor society that recognizes the academic achievements of community and state college students and helps them to grow as scholars and leaders. The society is made up of more than 3.5 million members and nearly 1,300 chapters in nine nations. For more on Phi Theta Kappa, visit ptk.org.