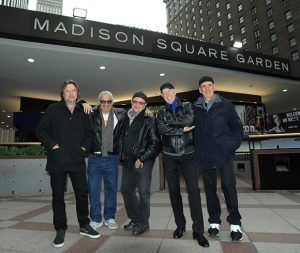 AVON PARK, Fla. – Dec. 12, 2019 – Hear the Musician’s Hall of Fame rock super-group and ring in the New Year on Saturday, Jan. 4 at 7 p.m. at the Alan Jay Wildstein Center for the Performing Arts at South Florida State College (SFSC) at the opening of the AdventHealth Trending Now Series. The Hit Men are musicians and vocalists who have performed and recorded with Elton John, Cat Stevens, Frankie Valli, Jim Croce, Rod Stewart, Three Dog Night, The Rascals, The Turtles, Carly Simon, and more.

This performance is sponsored by Sebring Rundown, C & C Plumbing, Realtor Dawn Dell, and South Florida State College Foundation. “It’s a great family show to celebrate the New Year,” said Cindy Garren, director of cultural programs at SFSC. “This is not a tribute show. They are the actual performers who created hits like “Joy to the World” and “Let’s Hang On.” The music and the stories are memorable!”

The above list of legendary artists were among the most influential rock and pop music icons of the second half of the 20th century and all share a common denominator—at some point during their careers, each had at least one of The Hit Men playing behind them on the road or in the studio. The Hit Men, a super-group consisting of Lee Shapiro, Jimmy Ryan, Jeff Ganz, Russ Velazquez and Steve Murphy, either played, sang, or performed on stage with one or more of these artists, creating or recreating live, some of the most memorable hits of the era, including “Who Loves You,” “Oh What a Night,” “You’re So Vain,” “The Locomotion,” “Mony Mony,” “Joy to the World,” and many more, on which they used their musical alchemy to help spin songs into gold and platinum.

In April 2019, The Hit Men became recipients of the first-ever “Road Warrior Award” from the Musicians Hall of Fame and Museum. This prestigious, Nashville-based organization honors talented, but often overlooked, musicians who played on the greatest recordings of all time. The award acknowledges The Hit Men’s “years of dedication to the music, and the countless miles … that they have traveled in delivering so many hits throughout the world.”

The Hit Men founder and manager Lee Shapiro is a producer, arranger, singer, and musician. As music director for Frankie Valli and The Four Seasons, he arranged and performed on some of their biggest hits. He also collaborated with Barry Manilow, Tony Orlando, and Tommy James and the Shondells.

The Hit Men co-founder Jimmy Ryan began his career in the 1960s as lead guitarist, singer, and often songwriter for The Critters. Later, he became Carly Simon’s music director and performed with her in the studio and on the road for 21 years. His guitar is heard on works performed by Cat Stevens, Jim Croce, Rod Stewart, Paul McCartney, Elton John, and many others.

Russ Velazquez is a singer, composer, and arranger whose credits read like a musical Who’s Who. He has collaborated with everyone from Sting, The Ramones, and LL Cool J to Luther Vandross, Korn, and Paula Abdul. He has earned four Emmy Award nominations for his songs on Sesame Street, and his song “2BA Master” hit the top of the children’s music charts on Radio Disney.

The Hit Men connect with audiences on a level rarely seen by today’s musical artists. From the classic songs we all know and love, like “Oh What a Night” and “You’re So Vain,” to the backstage stories never told until today, a The Hit Men show is like no other, as they combine the music and the memories alongside exciting multimedia footage and visuals, evoking an unforgettable musical and visual experience.

To quote Lee Shapiro, “Every story we tell, we can relate with complete honesty and legitimacy because we were there. We have an emotional connection with the audience that tribute bands and sound-alike bands can’t claim. When we share our experiences and tell stories, we aren’t reciting a script—we were part of the original event! When we tell you how Warren Beatty had a door slammed in his face from Carly Simon’s dressing room at the Troubadour in Los Angeles in 1971, we know it’s true, because Jimmy Ryan was the one who did it!”

Tickets for The Hit Men are $28, $22, $15, and child/student tickets are only $10. Groups of 13 or more receive a 25% discount. Tickets can be purchased online at sfscarts.org, by phone at 863-784-7178, or in person at the SFSC Performing Arts Box Office on the Highlands Campus of South Florida State College located at 600 West College Drive in Avon Park.