The Love Within a Family Survives a Law Enforcement Cadet 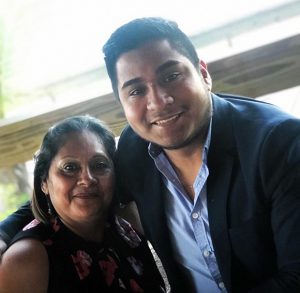 AVON PARK, Fla. – Jan. 8, 2021 – During the Dec. 9, 2020 South Florida State College (SFSC) Basic Law Enforcement Academy and Crossover Academy graduation, one cadet was honored in absentia. His name was Manuel (“Manny”) Gerardo Calderon and he had a lifelong dream to become a police officer.

“A young cadet, very promising in this profession, locally grown, had his life cut short far too soon,” said Michael Huften, coordinator, SFSC Criminal Justice Academy, at the ceremony. “During the presentation of these [Career] Certificates, you will hear his name called. I will ask his family to rise at that time so they can be recognized as we hold a moment of silence.” Later in the ceremony, a class flag was presented to Calderon’s family members who attended the ceremony.

Calderon had enrolled in the SFSC Law Enforcement career certificate program that started in July 2020. By the end of August, he had passed away after his car hit a tree on a rainy evening.

Calderon was one of four siblings to attend SFSC. Sister Maria earned her Associate in Arts from SFSC in 2008 and went on to earn her Associate in Science in dental hygiene in 2010. Sister Lourdes earned her Career Certificate in dental assisting in 2013 and her Associate in Science in Dental Hygiene in 2017. Maria and Lourdes now work for a dentist in Sebring, Fla. Sister Yesenia is a staff attorney working in the Children’s Department of the non-profit organization, Americans for Immigrant Justice, in its West Palm Beach office. Yesenia graduated from SFSC with her Associate in Arts in 2012, earned her Bachelor of Arts in English with a minor in Legal Studies from the University of Central Florida in 2014, and graduated with her Juris Doctor from Nova Southeastern University Shepard Broad College of Law.

The Calderon siblings chose to attend SFSC because it was relatively inexpensive and it was close to home. “We’ve always been so family oriented,” Yesenia said. “It was about staying close to home, having meals at home, and not having to spend money on an apartment in a city. My mom would cook for us and we’d take our lunch to college. Fortunately, both of my sisters were able to finish their academic programs at SFSC. At the time I was going to college, SFSC wasn’t offering a bachelor’s degree. If it had, I would have gotten it there.”

Calderon’s parents, Maria Barragan and Gerardo Calderon, immigrated to the United States from Mexico and were seasonal farm workers. “We were migrating back and forth from North Carolina to Florida following the harvest season,” Yesenia said. “In North Carolina, it was potatoes, cucumbers, and tobacco. Once that was done, we traveled to Lake Placid, Fla., where it was citrus.”

Yesenia explained that the girls were moving from school to school twice a year, which made it difficult to finish high school. “We would get held back,” she said. “In fact, I got held back in school twice.”

Eventually, their father obtained a permanent job in Lake Placid, where the family settled. “My siblings and I were excited that we were finally able to stay in one school and make friends.” At that time, their parents decided to have another child. “My two sisters and I wanted a little brother so badly,” Yesenia said. That child was Manny.

When Manny was 9 years old, Maria and Gerardo decided to get a divorce. “Manny was probably inspired to be a protector—as if to say, ‘You girls protected me, now it’s my turn to protect you,’” Yesenia said.

Yesenia indicated that Manny had a great love for Lake Placid. So he decided to enroll in the Law Enforcement program at SFSC and get a job after graduation. His goal was to stay in Highlands County and protect the community.

A week before Manny’s passing, the Calderon’s celebrated Yesenia’s 30th birthday in Orlando. “We did a toast,” Yesenia said. “Five days before he passed away, he thanked me for helping him with his schooling and applying to SFSC. He was like, ‘Hey, I’m really proud of you and thank you for helping me with school. You’ve always been there for me, helping me, pushing me, so I could enroll, even applying for the FAFSA [Free Application for Federal Student Aid].”

“I really wanted to see him go into the Law Enforcement program,” she said. “I knew he always wanted to be a police officer. My family attended the graduation ceremony because I know he would have wanted us to. It was sad for us because he wasn’t there, but we got to see how much his entire class admired him, loved him, and missed him. Most importantly, even though he was only in the program part of the way, he was loved by his professors and classmates. The stories they would tell us about him in school were amazing. It was a great honor that they recognized my little brother during the ceremony. Although he wasn’t there physically, I know for a fact that he was there with us.”