The Modern Gentlemen Perform at the Alan Jay Wildstein Center 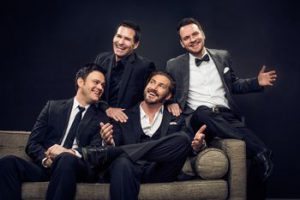 The Modern Gentlemen perform on Jan. 22.

AVON PARK, Fla. – Jan. 5, 2021 – The Modern Gentlemen quartet shared the stage with Frankie Valli for a decade as the Four Seasons. During their tenure with Valli, they developed their own signature sound and incredible precision dancing. They now tour the world performing hits of the 60s and 70s with four-part tight harmonies in styles ranging from pop and rock to jazz and doo-wop, and they make one appearance in Florida on Friday, Jan. 22. Two performances are scheduled at 3 p.m. and 7 p.m. at the Alan Jay Wildstein Center for the Performing Arts at South Florida State College (SFSC) in Avon Park.

“This is a must-see concert for anyone who loves doo wop,” said Cindy Garren, director of cultural arts at SFSC. “Their harmonies are awesome, and they’ve developed their own signature sound that blends classic hits with their own awesome style.”

The Modern Gentlemen were recently featured on the PBS special, “Doo Wop Generations” which aired across the country and have appeared as headliners in Las Vegas and their own residency in Atlantic City, N.J. With Valli, they’ve performed to sold-out concerts around the globe. In 2014, the gentlemen were featured on, “A Capitol Fourth” in Washington D.C. with Michael McDonald, Patti LaBelle, John Williams, and others, as well as two separate engagements on the Broadway stage. They’ve toured the United Kingdom, Asia, Israel, Canada, Italy, Australia, and New Zealand as The Modern Gentlemen.

“Due to social distancing, we’ve reduced seating capacity to 440 seats,” Garren said. “So, the Gentlemen agreed to perform two 75-minute shows without an intermission. This reduces movement in the theater.”

Seating is reserved by groups of two, three, and four to maintain a six-foot distance from other patrons. Face masks are required to enter the venue and during the performance. The entire venue is cleaned, disinfected, and sanitized before every performance. “We have implemented health and safety protocols recommended by the Centers for Disease Control and Prevention, AdventHealth, and the Performing Arts Consortium,” Garren said.

For a complete schedule, videos, and to purchase tickets, visit sfscARTS.org.