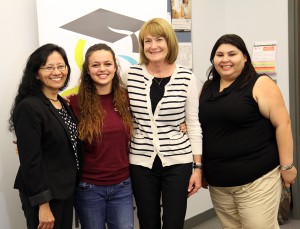 AVON PARK, Fla.–Dec. 7, 2015–On Dec. 1, Sierra Pelham arrived at the DeSoto Campus of South Florida State College’s Collegiate High School expecting just another routine day. Instead, she got the surprise of her young life.

Pelham learned she was among 14 finalists vying for one of six Leaders 4 Life fellowships, an award that comes with a $40,000 college scholarship.

Pelham was eligible for the fellowship because of her participation in the local Take Stock in Children (TSIC) program. The program matches students at-risk of not completing high school with mentors who guide them toward earning their diplomas, with college scholarships awaiting those who graduate and enroll in college.

“Sierra was chosen based on her strong leadership skills, moral character and academic success,” said Irene Castanon, coordinator of the local TSIC program administered by SFSC. Castanon had urged Pelham to apply for the fellowship after watching her progress in the program.

The Leaders 4 Life fellowship is a partnership between the Asofsky Family Foundation, which supports initiatives aimed at helping the state’s youth, and TSIC.

The 17-year-old learned she had been chosen as a finalist at the very end of the school day, when her classmates joined DeSoto High School administrators and Castanon in delivering the surprise announcement.

Pelham’s selection as a finalist from among 90 applicants brings her a MacBook Pro laptop. She will now submit a video essay to a statewide selection committee that will choose the six fellows in January.

The SFSC Collegiate High School is an initiative between the college and each school district in DeSoto, Hardee, and Highlands counties that allows students to complete their high school diploma at a local SFSC campus while simultaneously earning college credits or an occupational certificate.

Pelham has already gained admission to the University of Central Florida, where she will work toward a degree in social work. She has earned a 4.28 grade point average at the Collegiate High School and placed in the top 10 percent of her graduating class.

Castanon said Sierra’s academic achievement and leadership on campus were key to her success in ranking as a finalist.

“Sierra has been an active in the National Honor Society, music theater, and the robotics club,” said Castanon. “What’s more, she has shown leadership off campus by volunteering for Habitat for Humanity for the past three years.”

If Pelham gets the fellowship, she can use money for textbooks, housing, transportation, and other college-related expenses. Even if Pelham is not among those selected, she, like other students who successfully graduate as a TSIC program participant, will receive a scholarship that covers her tuition.