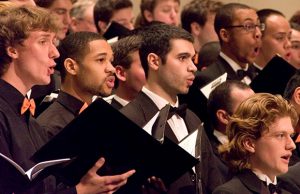 AVON PARK, Fla. – March 18, 2019 – The 60-member University of Florida Choir will perform its first concert on Tuesday, March 26 at 1:30 p.m. at the Alan Jay Wildstein Center for the Performing Arts on the Highlands Campus of South Florida State College (SFSC) in Avon Park. Conductor Dr. Will Kesling, who has served as the director of choral activities at the University of Florida for 16 years, has selected a program of spirituals and hymns from around the world and the Gospel Mass by Robert Ray.

Robert Ray’s 30-minute Gospel Mass premiered in 1979 at the University of Illinois at Urbana-Champaign. The response from audiences was wildly favorable. The joyful, toe-tapping music reflects African-American spirituals and jazz and the changes from the Second Vatican Council in the mid-60s. Ray composed the choral work in only two weeks.

“God controls everything I do,” said Ray, a composer, conductor and music educator. “It was written in about a two-week period. The hard part for me was not being a formally trained composer. The creativity was a result of divine inspiration. He was working with me.”

Under the direction of Dr. Kesling, with accompanist Tané Dekrey, the choir will begin with the “Kyrie” – Lord Have Mercy; then “Gloria” – Glory to God in the Highest; “Credo” – I Believe in God; “Acclamation” – Hallelujah Praise the Lord; “Sanctus” – Holy, Holy Lord God of Hosts, and wrap up the first half of the concert with “Agnus Dei” – Lamb of God.

Dr. Will Kesling has conducted hundreds of choral ensembles and 46 professional symphony orchestras throughout the world. His talents for weaving together text and music, chorus and orchestra have garnered him international respect. Dr. Kesling has conducted a number of engagements in Carnegie Hall and the Kennedy Center for the Performing Arts, as well as in major concert halls internationally. He served as the associate conductor of the Manhattan Philharmonic Orchestra in New York City; as the principal guest conductor of the St. Petersburg State Symphony Orchestra in Russia; and was the music director and conductor of the Mountain West Symphony Orchestra in Utah for 18 years.

“This is a beautiful performance during this season of Lent,” said Cindy Garren, director of cultural programs at SFSC.  “We invite all the Gators in Highlands County to come out to support these students.”

Tickets are $12, $15, and $18.  Groups of 12 or more can save 25 percent on ticket prices plus receive a free ticket for the group leader. The Matinee Series is sponsored by the Palms of Sebring and Lampe & Kiefer Hearing Aid Centers. Videos and information are available online at sfscARTS.org. Tickets can be purchased online, by phone at 863-784-7178, or by visiting the box office located at 600 West College Drive in Avon Park.