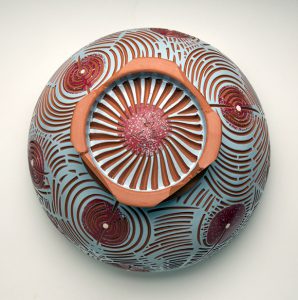 Bogdany’s work exemplifies and challenges the malleable nature of clay. According to the artist, many of the forms in this collection are a combination of wheel-thrown and hand-built constructions. Using a potter’s wheel, these structures are formed by altering, shaping, and compressing the clay`s surface area. In rotation, the clay is methodically worked until the surface is no longer recognizable compared to its original state.

“The forms are meticulously shaped to include an organic geometry that has occurred thematically within my work for over two decades,” Bogdany said. “It is my hope that these works express the same feeling of balance and unity to the viewer, as I receive when creating them.” 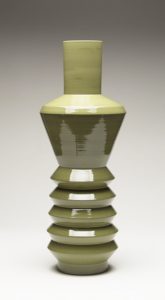 The horizontal and wall structures are a combination of hand building and relief carving. “Working in the medium of clay for many years, I have discovered the inherent beauty within the unaltered, raw state of the material,” Bogdany said. “Realizing the dichotomy of attempting to perfect a surface with a potter`s wheel that already holds an inherent flawlessness has caused me to expand upon my research. This awareness has influenced my desire to create a sculptural series that holds a truth in materials. The horizontal structures are meant to convey a harmonious balance between the material and the physical process of its alteration.”

MOFAC is located in the Wildstein Center at SFSC, 600 W. College Dr., Avon Park. The museum is open to the public on Wednesday, Thursday, and Friday, 12:30 – 4:30 p.m., or by appointment for group tours. Patrons of the Wildstein Center may visit the museum one hour prior to matinee and evening performances. MOFAC will be closed during SFSC’s Winter Break, Dec. 15-Jan. 1.

For more information about MOFAC and its programs or to request a museum tour, contact Megan Stepe, curator of MOFAC, at 863-784-7240, email stepem@southflorida.edu or visit mofac.org.

The District Board of Trustees of South Florida State College, Florida, hereinafter referred to as ‘College’, is requesting proposals from qualified vendors to provide a mobile welding trailer that will be used as a live welding training lab to provide students real world training.  The lab will be housed in a large trailer with live-welding units to train all welding processes (stick, MIG, and TIG) with 8 welding work stations.  The college will separately procure and install all the welding equipment.  The lab will continuously travel throughout the tri-county region (Highlands, DeSoto and Hardee Counties), as needed and can be stand alone with a diesel generator or with shore power connectivity for extended durations.

Additional information on the welding program can be found at: https://www.southflorida.edu/news/south-florida-state-college-awarded-500000-create-mobile-welding-lab

Avon Park, Fla. – Nov. 7, 2018 – The Alan Jay Wildstein Center for the Performing Arts at South Florida State College (SFSC) welcomes The Hunts, a Chesapeake, Virginia-based band made up of seven brothers and sisters who’ve been playing music together almost their entire lives, on Friday, Nov. 30 at 7 p.m.

The Hunts include twin sisters, Jessi and Jenni, and five brothers, Josh, Jonathan, Jordan, Justin, and Jamison. They range in age from 19 to 28 and learned to sing and play violin as young kids. The Hunts spent much of their childhood performing in their community. After widening their following and playing at theaters, universities, and major music festivals like Austin City Limits Music Festival (twice), Summerfest, Landmark, and Firefly, plus two national tours with O.A.R., they have over 10.3 million streams on Spotify.

“I saw The Hunts in New York City three years ago,” said Cindy Garren, director of cultural programs at SFSC. “They were so much fun and so talented that I wanted to introduce them to Highlands County audiences. This is wholesome family entertainment and a great way to introduce young people to live performances. The dress is casual and the parking is free.”

With a harmony-laced take on alt-folk that’s both breathtaking and sweetly ethereal, The Hunts write songs that move audiences with their positive themes and joyful sound. Their debut extended play record for Cherrytree Records/Interscope, “Life Was Simple,” features the lead single “Make This Leap” which was eventually featured in a national Milk Bone commercial.

With roots in folk music, The Hunts infuse their songwriting with a fresh sensibility that is both Americana and indie-inspired folk. Ron Wray in The Journal of Roots Music calls them “an undiscovered gem.”

When asked about The Hunts sound, singer/guitar player Josh Hunt explains, “We’re aiming to create something we think is cool, and real, and joyful, and emotional, and whatever relates to us personally. I believe that’s how you create the most genuine music.”

Prior to their Nov. 30 performance, The Hunts will conduct a Backstage Scoop at 6 p.m. in the Museum of Florida Art and Culture (MOFAC) at SFSC. The pre-show talk is free with a ticket to the performance and allows audiences to discover how they went from local band to national touring artists.

Tickets are $24, $20, $17 and $10 for children and students. Tickets are available online at sfscarts.org, by phone at 863-784-7178 or in person at the box office located on the Highlands Campus at 600 West College Avenue in Avon Park. Group discounts are available by calling or visiting the box office. Ticket subscriptions are also available and include savings and perks.

The AdventHealth/Florida Hospital Series at the Alan Jay Wildstein Center for the Performing Arts celebrates contemporary, family-oriented entertainment. Student/child tickets for all performances are only $10. Upcoming Trending Now performances include: Forever Young on Jan. 13 at 3 p.m.; Wild World of Animals on Feb. 17 at 7 p.m., Irish dance spectacular Rhythm in the Night on Feb. 24 at 3 p.m. and Cirque Zuma Zuma on March 3 at 3 p.m. Subscription packages are available for $92 – $117 for adults. The Trending Now Series is sponsored by All Around Septic and Sewer and the SFSC Foundation.

Avon Park, Fla. – Nov. 6, 2018 – SFSC will host a Veterans Day remembrance ceremony to honor the men and women who served their country in war and peace. The ceremony, which also commemorates the 100th anniversary of the end of World War I, will be held Monday, Nov. 12, at 10:45 a.m., at the flagpoles on the SFSC Highlands Campus in Avon Park. The public is invited to join SFSC students, staff, faculty, and administrators for this annual ceremony.

Colonel Mike Borders, a U.S. Army veteran, will deliver the keynote speech. Born into an army family, he earned his commission through the ROTC program at St. Mary’s University in San Antonio, Texas. He went on to serve in the army for 30 years as a signal officer and Latin American foreign area officer. Upon his retirement from active duty, Borders worked for over six years at the National Defense University in Washington, D.C. and moved to Sebring in mid-2014.  He serves locally on several military- and veteran-related boards, councils, and committees.

Two SFSC students will offer remarks in honor of all who served their country. U.S. Army Reserve Spc. Levi Lambert is the class leader of the Criminal Justice Academy’s Basic Law Enforcement Class 257, and Cpl. Vicente Moore, a U.S. Marine Corps veteran, is pursuing his Associate in Science in Business.

Larissa Meagher, a senior at Sebring High School, will perform a musical tribute. The Avon Park High School Air Force JROTC color guard will present the American flag. After the ceremony, the Knights of Columbus, Assembly #3203, will lead a Remembrance Walk through a portion of the SFSC Highlands Campus.

Visitors will find the flagpoles at SFSC adjacent to the circular driveway on the west side of the Alan Jay Wildstein Center for the Performing Arts, accessible through Entrance 3 on College Drive. For information, contact Kris Juve at juvek@southflorida.edu or 863-784-7189.