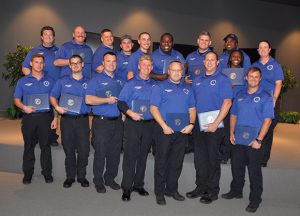 Ashworth told the graduates that there are five things needed to be successful in public safety. “Number one is showing up a little bit early,” he said. “Each one of you is going to work for an institution. Those people deserve for you to be there on time. Number two is working just a little bit harder. That means that when you show up, you have a good attitude. At 2 a.m., when a patient is having an event in their life, they don’t care that you don’t like your job or that you and your wife were having a bad day. That patient deserves to have 100 percent of you. It’s doing a little extra for your patient.”

Ashworth told the graduates to “be a student of history but don’t live in the past. As paramedics, we may make mistakes because we’re human. We need to look back on those mistakes and learn from them. But don’t dwell on the mistake.”

He urged the graduates to accept change, because medicine changes and will only continue to change. Therefore, he said, “If you don’t want to change, this is not the career path for you.”

Finally, Ashworth welcomed the graduates as paramedic colleagues. He said, “This is the first time that the instructional staff and I will get to call you by your first names, because that’s what friends do, that’s what colleagues do.”

In a heartwarming moment, the Graduating Class of March 2019 presented a plaque to their Paramedic program instructors which said, “We thank you for your commitment and tireless dedication to the EMS program and to our success as paramedics.” A second plaque was presented to honor Dolores Breedlove, administrative assistant for SFSC’s EMS program, thanking her for her dedication to the program’s success.

SFSC offers a two-year Associate in Science in Emergency Medical Services, which includes training in both EMT and paramedic programs. Upon completing this program, graduates can work in a supervisory EMS capacity.