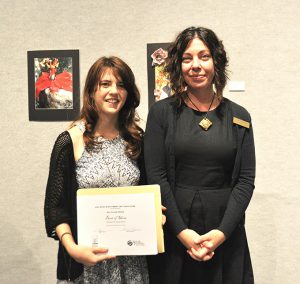 South Florida State College’s Museum of Florida Art and Culture (MOFAC) honored the winners of its annual juried student art exhibition during a reception on April 20.

The awards ceremony recognized drawings, paintings, sculpture, and a range of other artwork students created during their studies in SFSC’s Art Department. The students’ art is on display in MOFAC’s gallery through May 4.

Ann-Louise Abbott walked away with the Max Gooding Best in Show Purchase Award for her set of ceramic figures titled “Elephant to Heart Series.” She received $400 for the four-piece set depicting the transformation of an elephant to a human heart.

This year, two students, Alex Rodriguez and Meagan Smith, won the Max Gooding Award of Excellence for their artwork. The honor comes with a $100 check for each student. 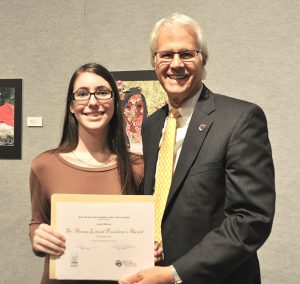 This year’s ceremony included the addition of new award category: People’s Choice award. Stepe said the winner was chosen by a vote of the students’ colleagues. Kelsey Pena’s drawing titled “This Took Forever: Morgan Antush” came out on top as the people’s choice.

Members of the Tanglewood Art League were on hand to present their sixth annual scholarship award. This year the league tapped two students to share the award. Abigail Zevallos and Kalani Dubberly each took home $300 for their submissions.

The show was juried by Joey Sacco, a local artist, former SFSC adjunct art instructor, and a member of MOFAC’s Advisory Committee.

The exhibition will be on view at MOFAC through May 4. The museum is open to the public on Wednesday, Thursday, and Friday, 12:30 – 4:30 p.m., or by appointment for group tours. Patrons of the Wildstein Center may visit the museum one hour prior to matinee and evening performances. For more information, call Stepe at 863-784-7240.