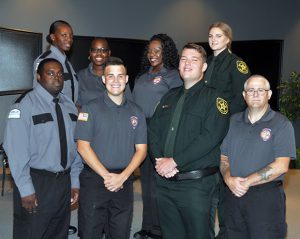 Guest speaker for the ceremony was LaKisha Collins, correctional probation senior officer with the Florida Department of Corrections.

Addressing the cadets, Collins said, “Each of you have transitioned from being regular citizens to successfully completing basic corrections academy. You have sacrificed a lot over the last three months and come successfully to this point in your life. Please don’t throw it all away by forgetting the rules and the sworn oath that you’re going to take once you take on this profound career.

“From this day until the day you retire and even beyond that point, you’ll be viewed differently in the public eye. Never take action based on emotion. Remember, not all actions deserve a reaction. What you do will have long-lasting consequences to the clients and/or inmates that you deal with on a daily basis. First of all, do not get complacent. I’ve seen many officers throw away everything they have invested in this career over split-second decisions. This is an exciting career with many pitfalls and stumbling blocks. Learn what to avoid. Seek out motivation and co-workers as mentors. And remember, even teachers have teachers. I’ve learned a lot from you guys.”