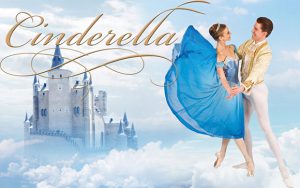 AVON PARK, Fla. – Feb. 24, 2020 – South Carolina Ballet returns to the Alan Jay Wildstein Center for the Performing Arts at South Florida State College (SFSC) with a magical production of Cinderella on Saturday, March 7 at 7 p.m. Part of the AdventHealth Trending Now Series, the ballet tells the best-loved fairy tale of love and jealousy in a lush production that is ideal family entertainment. Tickets are $29-$40 with a 50% discount for children and students.

“The stepsisters in this ballet are hysterical,” said Cindy Garren, director of cultural programs at SFSC. “Plus, we have local dancers that have been rehearsing for weeks who will join the professional dancers on stage.”

Cinderella was composed by Sergei Prokofiev during World War II. It was first performed by the Bolshoi Ballet in 1945.

Cinderella is conceived and directed by William Starrett, artist director of South Carolina Ballet. From his start at San Francisco’s Ballet Celeste and the Royal Winnipeg Ballet, through appearances as a principal for the Joffrey Ballet and as a member of American Ballet Theatre under the direction of both Lucia Chase and Mikhail Baryshnikov, to guest appearances with over 40 of the world’s most renowned ballet companies, Starrett’s talent as a dancer has earned rave reviews from coast to coast as well as a medal at the very first U.S. International Ballet Competition in Jackson, Miss.

Today, Starrett’s formidable reputation revolves most often around his choreographic and directorial accomplishments. As director and primary choreographer for the past 28 years, he has created or staged over 50 works—including 16 original, full-length ballets, 10 classical full-length ballets, and 16 original narrated one-act ballets for children—in locations throughout the United States and Europe.

Starrett is determined that no one—not even fathers dragged to the performance—will be bored, so there are lots of surprises. “The two ugly stepsisters are actually performed by men,” he said. “They are more actors than dancers, so we have the contrast of the beauty of the fairies and the hysterical stepsisters.”

Tickets can be purchased online at sfscARTS.org, by phone at 863-784-7178, or in person at the SFSC Performing Arts Box Office on the campus of South Florida State College located at 600 West College Drive in Avon Park.