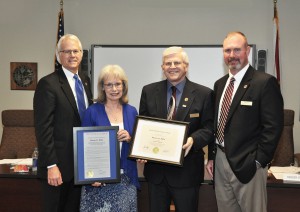 Hale began her first job at SFSC on Jan. 27, 1986, after moving to Highlands County from her native Miami to join her husband, David, who had already gone ahead of her to Avon Park to open the next chapter in the couple’s life.

“After taking a secretarial test along with dozens of other applicants, the college hired me for a secretarial position,” Hale said.

Hale’s first assignment paired her up with Wil Beumel, who was then the vice president for Academic Affairs and Student Services.

After a quick promotion to administrative assistant, Hale moved to human resources, taking up the post of personnel assistant.

“When I transferred to human resources in 1988, the office was housed in Building I,” Hale said. “Except Building I was a metal building that had been converted to office space from the college’s snack bar and bookstore.”

At that time, the college’s personnel management team was led by Glenn Little, who now serves as vice president for Administrative Services.

Hale recalled the setting as cramped, unlike her digs in the brick and mortar structure that’s now Building I. “Applicants completed their forms on clipboards sitting across from my desk,” she said. “If we needed to see Glenn, we had to squeeze by the applicants to enter his office.”

“Susie and I started working together at SFSC during the last century,” chuckled Glenn Little, vice president for Administrative Services when asked to reflect on Hale’s time at SFSC. “In 1988, I headed up the Human Resources office, and Susie was just starting her way up the HR career ladder, one that now ends in a well-deserved retirement for her dedicated service.”

As she makes her post-retirement plans, Hale looks back on her 31 years at SFSC and marvels at the transformation from small community college to a four-year institution.

“There was a time with then-president Dr. Cornelius would walk around during the welcome back get-together while asking employees what they did during the summer vacation,” Hale remembered. “That’s when we had fewer than 75 employees. The college president can’t do that now-it would take all morning.”

Now SFSC boasts three campuses, a center, and more than 270 full-time faculty members and employees, with dozens of adjunct instructors.

Hale said she takes pride in two accomplishments she helped shepherd through while at SFSC.  In 2001, she served on the Banner implementation team that saw the adoption of the integrated college-wide database management system. Recently, she oversaw the introduction of a web-based employment application, streamlining a paper-intensive process.

“Probably the highlight of my time as director was facilitating the presidential search along with other members of the steering committee,” Hale said. “I’ve had the pleasure of working with three presidents, and I’ve survived three accreditation site visits.”

With nearly a third of a century at SFSC, Hale noted one facet of life on campus hasn’t changed: a student-centered focus. “What has remained is the commitment to student success,” she said.

Hale’s plans for her post-SFSC life call for a mix of travel and tending to her home in Avon Park. After returning from a trip scheduled to start right after her retirement begins, Hale wants to try her hand at changing the look of her home with a slew of redecorating projects.

“I leave SFSC with a sense of a great hope that much good is in store for the college’s future,” Hale said. “One part of me wishes I could be part of that future.”