Dawn Pisarski, professor of nursing at SFSC and nurse practitioner, wanted to be a veterinarian. But after 30 years as a practicing nurse and nearly nine years with the college, it appears that there’s no going back and that’s OK.

At SFSC, she teaches pharmacology, nutrition, and medical-surgical nursing, and she’s earned a reputation at the college for her special interest in nutrition. In fact, she recently contributed the chapter, “Nutritive Value of Complementary Therapies for Oral Care” for the textbook, “Nutrition for Dental Health,” Third Edition.

According to Pisarski, her curiosity about nutrition started on a farm in the hamlet of Gasport, New York, between Niagara Falls and Rochester, on Lake Ontario.

Pisarski’s family had a dairy farm and she loved animals. “Taking care of the calves is where I first got interested in natural health and in nutrition. I would watch the calves as they grew and noticed that some of them looked and grew better than others. That really sparked my interest in nutrition.”

She also grew up with gardening. “My mother had a large garden,” she said. “We canned and froze everything from the garden. That fed the family for an entire year. We made butter and baked bread every Saturday. Everything was homemade.”

When Pisarski was considering her future after high school, her mother encouraged her to become a nurse. “She always wanted to be one,” Pisarski said. “But I wanted to be a veterinarian. When I was looking at veterinary schools and the cost and time involved, my dad said, ‘No, find something different.’”

After graduating from high school, Pisarski got married and had children. “The first year that I was married, my husband became very ill and was close to death,” she said. “He was in the hospital for five weeks and in the intensive care unit (ICU) for three weeks. When I was in the ICU with him, I watched the nurses work and decided, ‘This is what I want to do.’”

She waited until her children were in school before she enrolled in a nursing program. Shortly after graduating, she was hired as a nurse in the ICU of a local hospital. Over the next 20 years, she became certified to teach vocational technical education and biology, and earned her master’s degree.

In that time, Pisarski and her husband had a farm while raising their children. She worked as a part-time school nurse, part-time at a hospital, and held various other part-time jobs. “I cleaned house or made pies for a restaurant,” she said. A part-time job at the nearby Board of Cooperative Educational Services (BOCES), eventually, became full-time and lasted 15 years. BOCES is a public organization that provides shared educational services and programs, such as career and technical education, to school districts. At the local BOCES, she taught vocational education in health occupations, nurse assisting, and practical nursing programs.

In 2005, Pisarski became a nurse practitioner to embrace her passion for prevention. “I just thought that was a good level in nursing to initiate prevention and do a lot of teaching,” she said. “I feel like many diseases can be prevented and that our diet makes a big difference. So that brings me back to nutrition. We can prevent diabetes, we can prevent heart disease. There are a lot of diseases that we can prevent or we can slow them down or have them start later. If you can get 10 good years of health before disease sets in, that’s great.”

According to the Florida Association of Nurse Practitioners, nurse practitioners in Florida work under the supervision of a physician, hold master’s or doctoral degrees, “manage and provide primary and acute care, diagnose illness, prescribe tests and medications, and promote health and wellness.”

“As a nurse practitioner, assessment skills have to be very acute,” Pisarski said. “I have that sixth sense. I got that from working with animals when I was younger. You have to be able to put pieces together and make a diagnosis on a patient. You have to be knowledgeable about the medications that are going to take care of a concern.”

Pisarski has been a professor of nursing at SFSC since 2009. When teaching students, she considers nutrition important in patient care. “They’re going to be taking care of patients. Teaching pharmacology and nutrition go hand in hand because some foods interact with medications. For example, patients need to be aware that drinking milk when they’re taking certain medications will bind with the medication and they won’t get the full benefit of the medication. In addition, many herbals are blood thinning, so if a person is on blood thinners, they’re going to get over-treated,” she said. “Some examples of blood thinning herbals are ginger, garlic, ginseng, glucosamine, to name a few.”

“I teach students the importance of an egg,” she said. “Chickens are fed calcium, and that’s what makes that shell hard. When you eat a hard-boiled egg, the calcium from the shell leaches into the egg. So you’re going to get a little more calcium than if you were just to eat a cracked egg.”

Pisarski tells students that the egg is the perfect protein and explains by telling the story about a prisoner of war (POW) who was in prison for a year. “All the POW was given to eat was one hard-boiled egg and water every day,” she said. “When he was released and came back to the United States, it was anticipated that he’d be malnourished, but he wasn’t. He was expected to have vitamin and mineral deficiencies, but there weren’t any.”

In addition to teaching at SFSC, Pisarski serves as chair on the board of the Samaritan’s Touch Care Center in Sebring and does volunteer community service as a nurse practitioner at the center.

“Samaritan’s Touch is a clinic for the indigent,” she said. “Oftentimes, they don’t have health insurance because they don’t have jobs or they have low-paying jobs, and they’re looking for alternatives. Many of the clients don’t want to take medications and want to know, ‘What do I have at home that I can use?’ There are things at home that can be used right out of your kitchen cupboard for illnesses.”

“Everyone at some point will get a cold or flu, which are viruses,” Pisarski said. “Many of our foods are anti-viral, such as garlic and onion. They have anti-bacterial properties as well.” 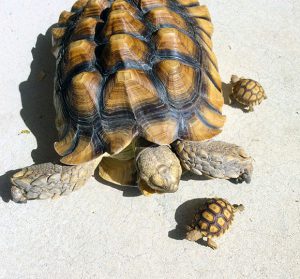 For years, chicken soup has been known for soothing cold and flu symptoms. “When you cook the chicken with the bone, it extracts anti-bacterial properties from the bone,” Pisarski said. “If you add your garlic and onion to the soup, you get better faster.”

In her personal life, Pisarski cares for her three tortoises: Mort, who is 8 years old and Elek and Chester, who are around 18 months old. “Years ago, a friend introduced me to tortoises,” she said. “I didn’t know anything about tortoises, so I did my research. Then, I fell in love with them.” She has raised tortoises for 20 years, primarily Sulcatas, or African Spurred Tortoises. Because Sulcatas are from the southern edge of the Sahara Desert in Africa, they spend their lives on land. “They don’t drink water,” Pisarski said. “They absorb water through their shells, so they have to be soaked with water on a regular basis. They’ll hold onto that fluid like a camel does and go weeks without water. Plus, they’re vegetarians, which makes them easy to care for.”

In spite of Pisarski’s years of dedication to nursing, she clearly hasn’t left her love of animals behind. Perhaps, a bit of the veterinarian still lies within her.