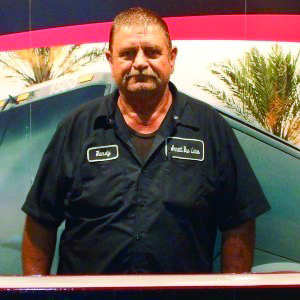 Funds from the $50,000 endowed scholarship will be used to provide tuition and fees for students currently enrolled in the SFSC Automotive Service Technology Program or the SFSC Auto Body Repair and Refinishing Program. The first scholarship of approximately $500 will be available beginning spring 2021, with preference given to applicants demonstrating financial need and a strong commitment to completing their respective program. An applicant must be a resident of DeSoto, Hardee, or Highlands County.

Allwood worked for Annett Bus Lines as director of maintenance from October 1986 until his death from lung cancer last March. According to David Annett, vice president of Annett Bus Lines, “Randy stood for the safe operation of more than 50 buses which traveled nearly 2.5 million miles per year during his 34 years with the company.”

“My husband kept saying, ‘I want to do something for kids,’” said Allwood’s wife, Janet. After speaking with Brian Annett, president of Annett Bus Lines, about establishing a scholarship for future auto mechanics, Janet went to Randy’s room in hospice and got his OK.

“At 1:40 the next morning, Randy passed away,” she said. “So, it was literally the last thing he wanted to do.” With the assistance of Brian and David Annett, Janet approached the SFSC Foundation to establish a scholarship.

“Randy always loved auto mechanics,” Janet said. “He was a fabulous mechanic, and he wanted to help other people get established in that career. When he was able to work, he mentored mechanics working under him. That way, he helped to further their education and get them trained.”

Originally from Wauseon, Ohio, Allwood’s family purchased the A&M Union 76 gas station in Sebring in 1966. “He was about 16 years old when he started working on motor vehicles,” Janet said. “He loved learning what made them work and, if they didn’t work, why not.” Allwood graduated from Sebring High School in 1972 and was the mechanic at Union 76 for five years until his parents sold the business. 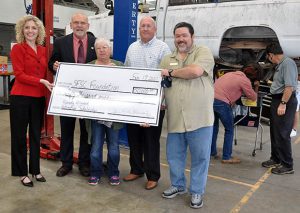 According to Janet, Allwood knew little about maintaining motor coaches when he went to work for Annett Bus Lines. “He taught himself by reading their 8-inch thick manuals and dissecting things.” Soon, he was teaching other mechanics. In fact, two of his mentees were Brian and David Annett.

Janet said that the Annetts were like adopted sons to Allwood. They worked with Allwood when they were teenagers, and they learned the bus business through him. “When he was ill, David and Brian would come by every week and talk with Randy for several hours,” she said. “Randy was not very responsive much of the time, but as soon as the boys came to visit him, he would perk up. He would talk all about the buses. He was still very much involved with the business up until two weeks before he passed. It gave him something to look forward to.”

David Annett best explained Allwood’s passion for passing along his know-how to auto mechanics. “Randy was most comfortable and most satisfied around young learners of the trade, particularly those he knew he could start off right,” Annett said. “He spoke often about the younger generation and seemed genuinely interested in passing along knowledge. Though it seems like a losing proposition to those who knew Randy, he had an incredible drive and desire to see others know what he knew—particularly, young mechanically inclined and curious future mechanics.”