The Goodtime Tuesdays Matinee Series kicks off its season at the Alan Jay Wildstein Center for the Performing Arts at South Florida State College with The Flying Horse Big Band, Jan. 10, 1:30 p.m. 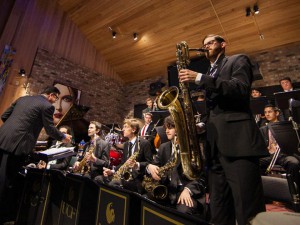 The jazz ensemble will perform music from Count Basie, Duke Ellington, and other swinging tunes from the Great American Songbook.

“It’s a trip down memory lane,” said Cindy Garren, SFSC’s director of Cultural Programs, “Music lovers will want to take in this 17-piece big band, one of the premiere musical ensembles in the state.”

Single tickets are $12, $14 and $18.  Groups of 12 or more receive a 50 percent discount for this performance plus one free ticket for the group leader.

The Flying Horse Big Band is comprised of world-class students studying at the University of Central Florida in Orlando. They have appeared at the Montreux, Switzerland, and the North Sea Jazz Festivals, as well as jazz festival and concert appearances in the United States.

The group has had four recordings on the national jazz charts: “B.M.O.C,” “Into the Mystic,” “The Blues is Alright,” and “Jazz Town.” The band has the distinction as one of the few college groups to have its first two professional recordings hit the top 50 of the JazzWeek charts.

“Swing in the New Year and recall those days of the Andrew Sisters, Frank Sinatra, and the Lindy Hop with the Flying Horse Big Band,” Garren said.

Subscriptions are available for all 10 Goodtime Tuesdays Matinee series shows.  Tickets are as low as $14.50 when buying a subscription, and subscribers can reserve the same seat for all 10 shows.

Upcoming shows in the 1:30 p.m. Goodtime Tuesdays Matinee Series are:  David Osborne Trio; “You’ll Never Walk Along” with The Brian Gurl Band; Aquila Theater’s production of the Agatha Christie mystery “Murder on the Nile”; The Dean Martin and Jerry Lewis Tribute Show; “What’s New, Pussycat?,” a 1960s dance and music revue; “Shake, Rattle and Laugh” with Mark and Rodi; a rock and roll extravaganza with Pauly and the Goodfellas; a Neil Diamond tribute with Neil Zirconia; and the “popera” vocalists of Bravo Amici.