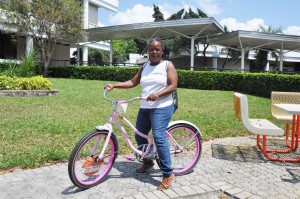 Sharon Jones seated atop the bicycle that she’ll pedal to classes at South Florida State College.

Now she can pedal her to way to school. No more hitching rides or 30-minute walks under Florida’s punishing sun.

Jones is no middle or high schooler. Now a grandmother, Jones is poised to earn her GED at South Florida State College in a few months. The two-wheeler gives Jones a reliable way to get to classes on SFSC’s Highlands Campus.

The purchase of Jones’s bicycle came from funds earmarked for SFSC’s Farmworker Career Development Program, an initiative that aims to help farmworkers learn the skills needed to compete in today’s job market.

“I’ll now be able get to SFSC in less than 15 minutes,” said Jones, when she picked up her bicycle last week at the office of her case manager on the college’s campus in Avon Park.

Jones moved to Avon Park one year ago from South Carolina, where she picked fruit and vegetables. She heard from parishioners at her church that SFSC had a program to guide farmworkers toward jobs that offer self-sufficiency.

After running Jones through an assessment, SFSC’s farmworker program placed her in adult education classes to prepare her for the adult high school equivalency examination. Jones said she plans to start a certified nursing assistant program once she has her diploma in hand.

“Even though Sharon had no means of transportation other than her feet, she had a perfect record of attendance,” said Tara Jefferies, the coordinator of SFSC’s farmworker program. “Her progress was so good that we decided to purchase a bicycle for her to ensure she made it through the final months of study, especially now that the heat is turning up.”

Colleges in regions with high concentrations of farmworkers participate in the federally funded program. To enter the program, students must be U.S. citizen, or legal resident, with a work history on farms. While most of the funds go toward tuition, case management, and classroom-based supports, the program can purchase critical items for students—items like bicycles.

Jones said she has pinned her hopes on working in a nursing home. She relishes the chance to settle into a career away from fields.

“Now I can stay on campus studying as long as I want without having to worry about how I’ll get home,” Jones said, as she seated herself on the bicycle.

“Can I take the cardboard off the wheel now?” Jones asked Jefferies.

“Of course,” Jefferies said. “It’s yours now. Just watch out for the cars!”