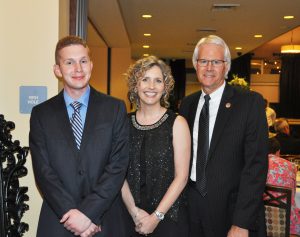 On April 29, more than 160 supporters and friends of the SFSC Foundation turned out for its annual Spring Gala, a fundraising dinner and auction doubling as a celebration of the group’s support of South Florida State College.

“This was the Foundation’s 33rd gala,” said Jamie Bateman, SFSC’s executive director for Institutional Advancement, who wraps up her second year leading the Foundation. “This is not only an evening to raise money for scholarships and the college’s capital campaign, the Partnership Project, but a wonderful opportunity to say thank you to the many residents of Hardee, DeSoto, and Highlands counties who, through their support, make our students’ dreams come true.”

The Foundation held this year’s gala at Sun ‘N Lake’s Island View Restaurant. In a twist, the Foundation brought in SFSC’s Panther baseball players to add extra charm to the evening. Clad in crisp white shirts and bow ties, the players escorted guests to their tables and lent a hand in serving diners their meals.

Before the guests started their meals, Emily Swenson, president of the SFSC Student Government Association, thanked the Foundation’s supporters for their generosity and spoke of how their support touched the everyday lives of SFSC’s students. “In my two years on campus, I’ve been surrounded constantly by folks at SFSC who want the best for me and my fellow students,” she said. “Your support of the Foundation makes much of that possible.”

Swenson, who has her sights set on a career in broadcast journalism, will deliver the student Commencement address at the second of two SFSC graduation ceremonies on May 4.

The auction, donations, and ticket sales raised $51,000— up more than 10 percent from the previous year —for scholarships and SFSC’s Partnership Project, a major capital campaign to bolster the Foundation’s endowment.

Before a live auction called by Don Elwell, Highlands County commissioner, the guests heard from Brandon Rosenbaum, a second-year SFSC student who earned a Foundation-managed scholarship set up by the Highlands County Bar Association.

“There’s something special about studying at SFSC and the people you meet here,” Rosenbaum said. “I don’t think there are many colleges where I would have found the individualized attention and the support from so many caring people.”