Local residents, SFSC boosters, and the curious had a chance to try out the rooms at the Hotel Jacaranda, and do so for free. 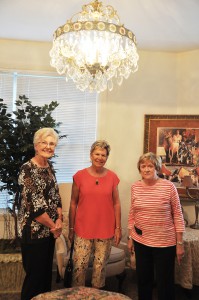 Under the chandelier in Room 208 of the Hotel Jacaranda. From left, Nancy Palmer, Barb Hall, and Joan Hartt.

At the invitation of the SFSC Foundation, guests in groups of two, three, and four turned out for an open house featuring tours of 16 newly restored rooms at the near century-old hotel on Main Street in Avon Park.

The hotel, affectionately known as the “The Jac,” is owned and operated by the SFSC Foundation, an auxiliary organization that raises funds for scholarships and supports programs at SFSC’s campuses in DeSoto, Hardee, and Highlands counties.

The room restoration project came about under the guidance of Joan Hartt, an SFSC Foundation board member, former SFSC trustee, and lifelong Highlands resident.

After 90 years of giving comfort to overnight guests, Hartt saw that the 60-room hotel needed some attention. She set about selecting guest rooms for a complete makeover.

“This is a thrilling evening and one that has many folks here surprised by the outcome,” Hartt said, as the guest crowded the hallway, walking through the restored rooms, taking in the new furnishings, decorations, and restored windows.

“You must look at the chandelier,” Hartt exclaimed as visitors entered Room 208, whose door bore a plaque embossed with name Vivian P. Hartt, her mother-in-law. “Decades ago that chandelier hung from the ceiling of Vivian’s home along Lake Lotela.”

The chandelier now hangs in the sitting room guests will enter with renting Room 208. Crystals dangle from a brass ring inlaid with circular porcelain medallions bearing images painted by hand.

The room also features old photographs of Hartt’s mother-in-law and a drawing of the family house where the chandelier once found a home.

When construction came to end in 1926, the three-story brick building boasted luxury rooms, a grand dining room, and an arcade with fine shops. During the roaring 1920s and early 1930s, “The Jac” played host to Clark Gable, Babe Ruth, and the St. Louis Cardinals during their spring training.

“This hotel holds so many memories and means so much to so many people that I felt compelled to get involved by giving a select number of rooms individualized attention,” Hartt said.

“As you step into the some to the rooms and pause, I can’t help get the feeling as if I were walking back in time to a day nearly a century ago,” said Jamie Bateman, SFSC’s executive director for Institutional Advancement, who heads up the SFSC Foundation. “Joan and her family have brought old-world charm, grace, and elegance back to the Hotel Jacaranda’s rooms. 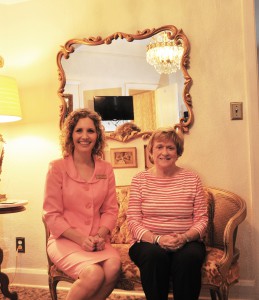 Recognizing its historical significance, the SFSC Foundation acquired the Hotel Jacaranda in 1990. The rooms on the building’s south-facing side have continued to function as a hotel. The rooms on the north side of the hotel serve as a residence for SFSC’s students.

Bateman said seven second-floor restored rooms need sponsors. “We hope that Foundation supporters will recognize the importance the Jac plays in the life of our students, the history of Avon Park, and SFSC.”

Donors can either decorate a room themselves or hand the task over to Hartt, who will be assisted by her daughter-in-law Sheila and friend Parton, both professional decorators.

Donors will have a plaque recognizing their support affixed to the door of the guest room they’ve sponsored for renovations. The plaque can recognize a loved one or a departed relative.

The room renovations will next move to the hotel’s third floor, where 14 rooms have been selected for renovations starting next year.

Bateman said friends of the SFSC Foundation, or anyone with a fondness for preserving history, can sponsor a room renovation by contacting her at 863-784-7181 or batemanj@southflorida.edu.