“You have proven to our faculty that you’ve been successful in the classroom, in the lab, and in the field,” Erik Christensen, dean of Applied Sciences and Technology, told the graduates, with family and friends looking on from the auditorium’s seats.

Nott, a DeSoto County resident, received special awards for “Highest GPA for Lecture” and “Highest GPA for Lab.” Isom was presented an award for “Most Heart” for his passion and determination, Richard Shepard, EMT instructor, announced at the start of the ceremony.

Upon completion of the program, graduates are eligible to take the Florida EMT State Board examination. 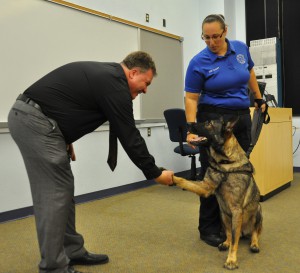 Barrett thanks Richard Shepard for awarding him an honorary EMT certificate.

For the 65-year-old Isom, the graduation kicks off a second career. Isom enrolled in SFSC’s EMT program after retiring from a 30-year stint with the U.S. Postal Service.

“It’s been an amazing 16 weeks learning emergency medical services alongside my peers and under SFSC faculty,” said Isom, who will work for Positive Medical Transport in Highlands County.

Also receiving an honorary certificate was Barrett, a German Shepherd, who attended the course as Tyson’s service dog. Tyson, a U.S. Army veteran who served in Iraq, brought Barrett to the ceremony and accepted the certificate on his behalf.

EMTs function as part of an emergency rescue and transportation team by responding to emergency calls, assessing scenes of accidents, setting priorities for treating patients, and providing prehospital emergency care.

Shepard noted the class of 10 graduates closes a chapter in EMT education at SFSC. They were the last class to graduate under the state rule requiring 250 hours of instruction, Shepard announced during the ceremony. He said all new classes will complete 300 hours of instruction.