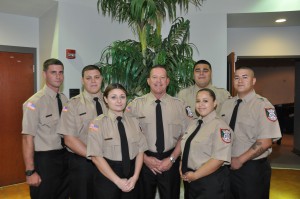 The class of five men and two women filed into SFSC’s University Center Auditorium on the Highlands Campus for the 7 p.m. ceremony and stood at attention while a color guard presented the Stars and Stripes. Family and well-wishers filled the auditorium seats.

Before picking up their diplomas, the cadets, dressed in brown uniforms, heard a send-off speech from a guest chosen by the class.

“Your new public service family is counting on you to raise the bar and raise the standard,” said Greg Bubb, a detective with the State Fire Marshal’s Office who investigates fires and arsons in south central Florida.

“Don’t be scared, be vigilant,” Bubb told the cadets. “Don’t be nervous, be ambitious. Don’t be complacent, be tenacious,” said Bubb, who patrolled Highlands County as a deputy early in his career.

He sounded notes of caution mixed with encouragement throughout his 10-minute speech. He told the cadets law enforcement is challenging but, at times, treacherous.

“Your goal is not survive, but to win,” he said.

Michael Huften, SFSC’s coordinator of criminal justice training, then called up the seven cadets from Basic Law Enforcement Program Class 245 to the stage to hand them their challenge coins, specially minted medallions that signify their achievement and bond as future law enforcement officers. Kevin Brown, SFSC’s dean of applied sciences and technologies, presented the cadets with their diplomas. 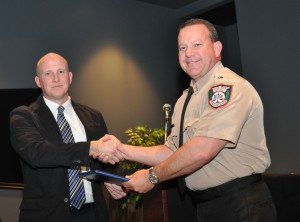 Huften singled out Duxbury and Sottile for their achievements during the 11-month course. Duxbury earned top honors for his academic excellence and Sottile scored the firearms award for his work on the shooting range.

Cadets typically complete the basic law enforcement course in six months. But this class of cadets enrolled in the part-time option, nearly doubling the completion time.

Ford, who was tapped as class captain, took to the lectern to sum up his fellow cadets’ accomplishments.

Ford thanked SFSC’s instructors for teaching them life’s lessons and helping them make it to graduation. Then, addressing his fellow cadets, Ford commanded them never to forget the motto their class had adopted.

“Fight to the finish,” Ford said, with the audience erupting immediately into applause.