On March 9, visitors in search of a pygmy fringe tree in bloom at South Florida State College’s Pygmy Fringe-Tree Wildflower Festival got their wish.

The rare plant was in full bloom, showing off its flowers to dozens who turned out for the annual festival put on by the SFSC Museum of Florida Art and Culture (MOFAC) on the college’s Highlands Campus in Avon Park. 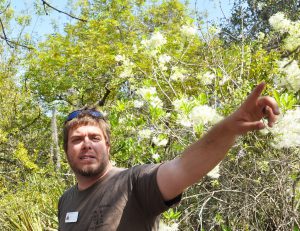 “Here is one of the few places on the planet where you can see the pygmy fringe tree,” said Dustin Angell, an education coordinator with Archbold Biological Station. He was standing in front of the rare shrub just a few feet back from a winding path of white sand known as SFSC’s Wildflower Wayside Shrine Trail, which runs parallel to College Drive.

“There’s another pygmy fringe tree near Bok Tower Gardens in Polk County, and one more in Highlands, but that’s about it,” Angell told a group of 15 people he led on a walk through the trail. The group was just one of several who came out for the festival, now in its fourth year.

The festival kicked off with music by Florida Seminole songwriter Rita Youngman, who sang songs telling the lore of her tribe. Keeping the wildflower hunters entertained during musical interludes, Florida folklorist Carol Mahler, recounted oral traditions explaining, for example, how possums have such little hair on their tails.

Members of the Audubon Society and the Ridge Rangers were be on hand to answer questions from the public about the region’s natural habitat. Visitors walking along the path found artists from the Lake Placid Art League capturing the flowers in their plein air, or open air, painting.

“Our Wayside Shrine Trail is one of the few venues where the public can encounter this rare and extraordinary shrub,” said Megan Stepe, MOFAC’s curator, who organized this year’s festival. She noted the timing was perfect this year, with the pygmy fringe tree in full bloom for the visitors. Last year, only one tree, which was inaccessible to the public, flowered during the festival.

The trail was the brainchild of MOFAC’s former curator, Mollie Doctrow, noted for her award-winning woodcuts of natural habitats. She conceived the trail based on her own exploration of nature. The trail opened in 2011. 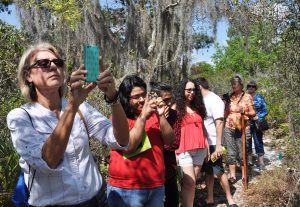 In addition to the pygmy fringe tree, visitors can glimpse a range of native plants flowering along the trail: the big flag pawpaw, sky-blue lupine, and another endangered species, the scrub St. John’s Wort.

Visitors to the trail can leave behind their impressions of the views in notebooks found in wooden shrine boxes sitting atop poles along the path. The boxes, designed by Doctrow, contain information that showcases the shrubs and wildflowers. Relief images of the trail’s wildflowers adorn the side of each box, allowing visitors to make a rubbing on paper as a memento of their visit.

The trail is open to the public during regular college hours. Visitors should look for Entrance 5 along College Drive. A sign across the roadway marks the point where the trail begins.

For more information on the Wayside Shrine Trail, contact Stepe at 863-784-7240 or stepem@southflorida.edu, or visit the website at mofac.org/wayside.