With families, fellow students, and college administrators looking on, the students took part in the rite of induction into the global honor society that recognizes distinguished academic achievement and service by students in two-year academic programs.

At the start of the ceremony, Dr. Thomas C. Leitzel, SFSC president, led the chapter’s officers in reciting their oaths of office. “PTK is about academic achievement and service, and that is what’s meaningful in today’s world,” Dr. Leitzel said, after swearing in the officers. “We need more people in leadership roles who hold the same values as PTK.”

Dr. Sonji Nicholas, SFSC professor of sociology, and the chapter faculty adviser, served as the guest speaker. In her remarks, Dr. Nicholas encouraged the students to give thought to the value of a global education in the context of academic achievement, leadership, and service.

“There are more than seven billion people on the planet today using myriad languages, belief systems, and practices,” Dr. Nicholas told the students. “Individuals who are open to learning about cultures beyond their own, and who can develop and expand upon their base of knowledge of people groups found throughout the world, distinguish themselves as highly effective leaders to whom others can and will look for guidance when faced with challenging problems calling for creative solutions.”

Dr. Nicholas, who recently returned from the African nation of Senegal where she served as Fulbright scholar, said the timing of the students’ induction into PTK could not have come at better time. She noted SFSC had honed its mission to emphasize connecting the local with the global and sees its role as preparing students for the leadership roles they will eventually play in the larger global community.”

Students who have earned at least 12 credits and a 3.25 grade point average at the start of the fall academic term were eligible for induction.

As the ceremony drew to a close, the inductees stepped to a candlelit table upon which lay the honor society’s membership book.

One by one, they affixed their signatures in the book, recording their status as scholars of distinction at SFSC.

Then, with the auditorium lights dimmed, the scholars helped each other light a candle signifying their fellowship in the society.

“This is a great time to be a member of Phi Theta Kappa,” Dr. Nicholas said. “I encourage you to challenge yourself this year by maximizing your participation in this new global network to which you are now connected.” 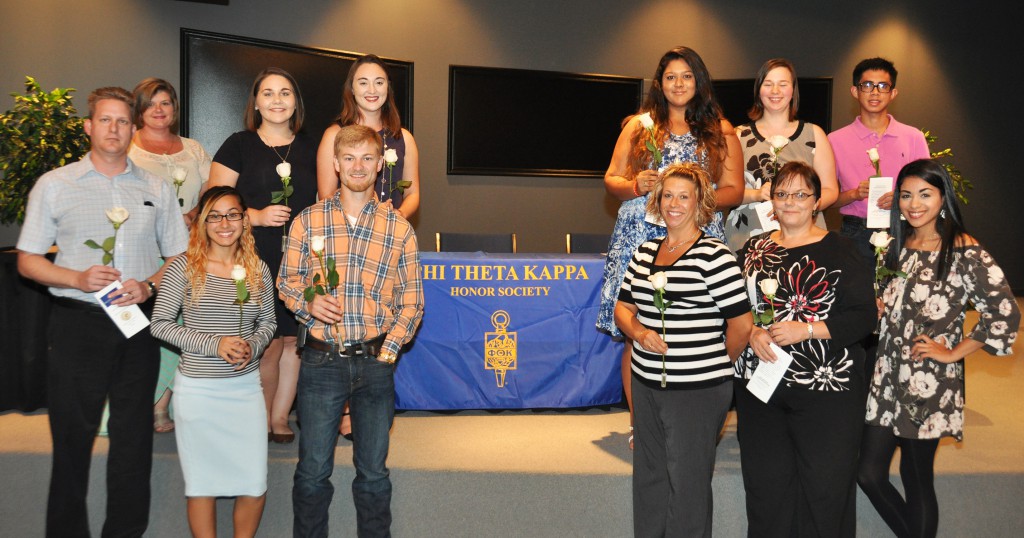